August 9, 2012
Uncle Milton's National Geographic Outdoor Explorer toys showed up at our front door this week, and the kids, of course, were thrilled. We're always looking for fun new things to play with outside.

The All-Terrain Nature Collector was the first toy they grabbed. It's a handy-dandy contraption that allows your kids to catch and observe bugs, water life, caterpillars, worms, and moths before releasing them back into their environment. Since we have a stream that cuts through our backyard, my daughter took the Nature Collector there first. It's about 8 inches long, allowing her to kneel and collect water in the see-through dome. She'd bring the dome up to eye level, look to see if she caught anything, and then start again. It kept her busy for a LONG time, and after that, we moved over to the woods to see if she could find some bugs. She also tried to use it to capture lightening bugs later that night! 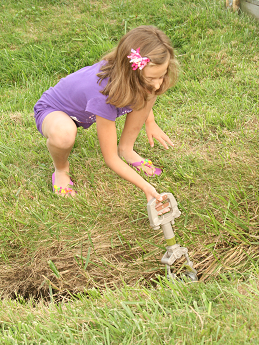 Next, they tried out the 4-in-1 Explorer Navigation Tool. This tool has a compass, a whistle, a signal mirror, and a thermometer. So, we headed outside to look at the compass and to talk about direction. This was also a useful way to explain where the sun rises and sets every day. Both kids marched around, announcing, "Now I'm going north, now northwest," and I'd tell them to go in the opposite direction and then tell me what the compass said. I think they want to take the 4-in-1 tool with us the next time we geocache. We also tried the signal mirror out, and that was very cool (and of course, we'll need to buy another one if they want to send signals back and forth). They took turns reading the thermometer and then they played with the whistle. The whistle's pretty loud! I'm going to use it to call them into the house from now on if I can snag it from them! A belt clip is included so that it'll always be right at your side. 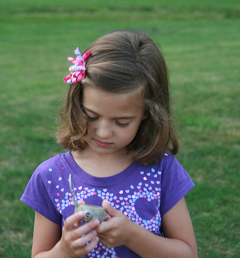 Earth Tag is a slingshot that includes yellow "Earth Balls." My son took it and played with it forever, hitting the playset, trees, his sister, the side of the house, low-hanging leaves, and anything else he could find. The balls are foam, so they're not going to hurt anything. I just had to warn him not to shoot it at his sister. I also realized later that he brought it into the house, which had A LOT more targets. This was definitely his favorite!

To take a look at these and more Uncle Milton Toys, click here. Next week, I'll be reviewing explorer toys for evening fun!

Could Your Name Go Here?

If you've ever thought that running this Macaroni Kid edition looks like a fun job, you'd be right! So guess what? Now's the time! We have an opening for a publisher for this site! Click here to find out how to join our team today!